The Osa Wildlife Sanctuary tour leaves by boat at 6 am from Pavones.  We take a serene 2 hour boat ride, leaving ample time for whale and dolphin sightings en route, for a 9 am sanctuary tour.  The sanctuary tour is given by a resident volunteer and supplemented by Pavones Ecotour's founder and biologist, Katie Mann.  The sanctuary founder visits us at the end of the visit with her entourage of spider monkeys that she has rescued during their infancy.  After the tour we go snorkeling and return to Pavones by midday.  Snacks and drinks are included. 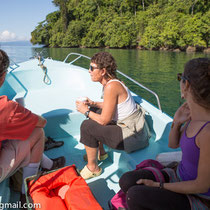 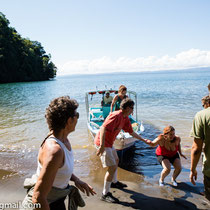 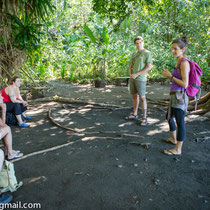 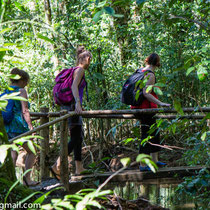 "The Osa Wildlife Sanctuary was established by in 1996.  Originally, the sanctuary was focused only on birds. Then, after Poppy, the spider monkey arrived on October 29, 2003 - the flood gates opened. The sanctuary is now home to a wide variety of orphaned and injured animals (about 70 animals in residence). The sanctuary is situated on the Golfo Dulce coast at Cana Blanca. The property is contigous with Piedras Blancas National Park. With the protection of Piedras Blancas, much of the original sanctuary property's 700 acres became part of the Park" (copied directly from the sanctuary website).

$105 per person for a group of 5.  This includes boat tour, bilingual biologist guide, snacks and drinks, snorkeling and sanctuary entrance fee.